skip to main | skip to sidebar

I know what you are thinking! Sandy is blogging twice in one week? It must be the end of the world. Not the end of the world I just am sick of homework.
So this summer we went camping with my family to Panguitch lake. Like we do every year. This year for the first time in 12 or 13 years I had a fishing license due to a fishing trip with my dad that was blogged about in February. So I pulled myself out of bed a couple times and went fishing on the party barge which is my uncles boat. 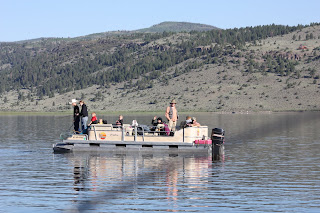 This is the party barge we had so much fun fishing on that thing! Thanks again Uncle Scott!
Anyway the day I took this picture...actually at this exact moment when I took this picture Wade, My mom and I were fishing from the shore. The fuzzy grey like in the picture is actually Wade's pole. After I took this picture I brought my camera down just in time to watch Wade's pole litterally jump out of the holder on his chair. I'm sure I said something ingenious like "uh oh" and then his pole just took off. Shortly it was out of sight to me. Wade not to be beat and knowing he had borrowed that pole (I'm sure if it had been his he would have just let it go) went zooming in after it. Wade went running into the water when he got to about knee deep he stooped down and snatched his pole out of the water and started reeling. He was able to reel it in fairly easily so we were thinking that some minnow had just tried to snatch his pole.
We Were Wrong. 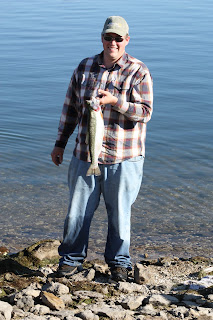 This is Wade's "little" pole snatching fish. It's a rainbow trout and weighed about 4 lbs. That was it for him though I didn't see him touch a pole after that. 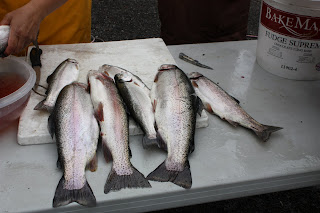 This is part of our catch for one of the days! We haven't had such a good fishing year at Panguich for years!
We had so many fun times we took 4 wheelers this year and that was really really fun. 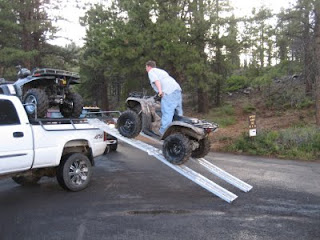 Wade bought a new rack for his truck. He thought loading the 4 wheelers was the most fun he could have! Not really. One day we had them out and we got rained on, and by rained on I mean poured on. So we raced back to the campground and sat in the truck for a while until the rain stopped then we still didn't want to try and put them on the rack so we toad them back to camp. We weren't allowed to drive them in the campground. 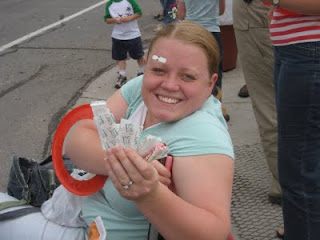 This is me at the 24th of July parade in Panguich town. An ambulance went by and threw out candy taped to band-aids the kids all kept their candy but they all gave me the band-aids because see that white band-aid on my head, that's right I cracked my head open on the new 4 wheeler rack. I saw stars and it dropped me to the ground and gave me a whopping headache and now I'm sporting a little scar but it's all good, battle wounds you know.
We had a great summer soo much fun!
Now like I kind of promised pictures of the Cutest Tucker kid in the whole world. 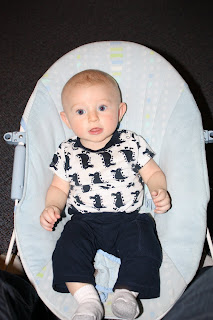 I took this at great grandma Schaugaard's house when we were down there for the hunt. 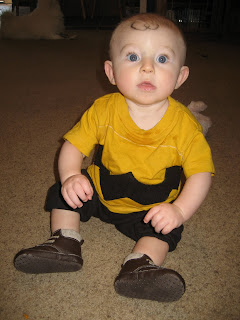 This is Mr. Tuckers Halloween outfit. He was Charlie Brown if you couldn't tell, and so cute! He's a smart one too. He almost convinced his parents that a real live beagle would be a good addition to his costume. 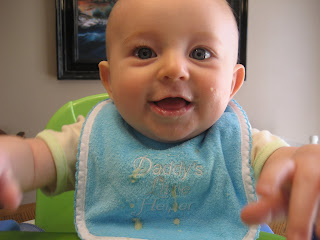 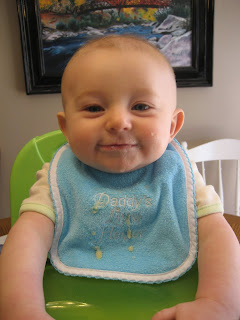 So it has been a few months, I'm in the middle of my homework that is due tonight and I am looking for distractions before I go crazy.
Yep that's right Sandy is back in full time school mode. What am I thinking? Well I'm thinking I could have my bachelors in my made up degree (literally they created one for me because I had too many credits but no direction) by spring YAY!! But as it stands my 13 credit hours keeps me pretty busy.
So anyway a quick update on my life. First of all for those of you who don't know I am an aunt. My brother and his wife had their baby clear back in May... I never said I wasn't behind on a couple things 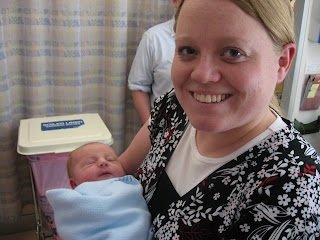 This is Tucker J Schaugaard at about 3 hours old or so he is so blasted cute I can't stand it.

He's much cuter now and I tried to steal a picture from My Sister-in-Law's blog but was unsuccessful. I'll have to work that out for another day.
We had a terrific summer we went camping and spent lots of time with Family. Sadly My card isn't working on my other camera so I can't get a lot of my pictures to work and I don't have time to keep fighting it. So we are going to do the boring version.
This fall I was able to go muzzeloader hunting with my dad, my grandpa, my uncle and a couple cousins. This was the first year I drew out so it was pretty exciting. It's actually a really funny story. First you must know that I hadn't seen a deer at all on this trip, also because of homework I didn't make it down to Monticello till later in the week. I also had never shot the gun I was using I hadn't even looked down the sights to see how they worked. I pretty much had myself convinced I was just camping. There was no way I would actually get anything.
On the last night my dad and I went up to sit by a spring hoping at least to see a deer on this trip. I don't think either of us thought we would see anything we could shoot at. So there we sat for 3 hours or so. About 30 minutes before sunset my dad whispered "SANDY! look" I looked and I didn't see anything. I looked and looked and nothing. I thought he must be seeing things. I looked over at him and he was looking but it seemed he couldn't see it anymore either. So I sat back and kept looking but not so intently. Then I heard my dad say "SANDY, Take him" I looked at my dad and he had his gun up. I whispered "I don't see him" He gave me a look like What? and said he's right there. I looked and holy crap right in the middle of the clearing, maybe 50 yards away, not a bush or leaf between us was the biggest deer I've ever seen! I pulled my gun up and took aim and hoped the sight wasn't off or something and fired. That deer took off so fast I couldn't believe it, before the smoke cleared he was way gone. My dad had fired immediately after me but knew he missed. We were both so mad. First he could have shot it at least 10 times before I had taken my shot, he also said he had never had a shot like that in his life. I couldn't believe I had missed. I was so mad! He decided to go check for blood before we went back to hunting so down the hill he went. After a few minutes of poking around he came back to where I could see him and motioned me down. He found a blood trail and we followed it till ... Holy Crap I'd got him. A big 3 point, I'd hit him right through the lungs. It was well after dark before we got off the mountain but we were so excited! 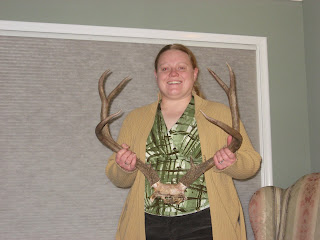 This is the rack he was a pretty bloody deer so I decided against posting pictures of him.
Other than that it's life as normal. I'm still subbing and working at the Bakery. Wade is also as always working at the bakery. Besides work and School our lives are pretty boring.
Button keeps us pretty entertained though. 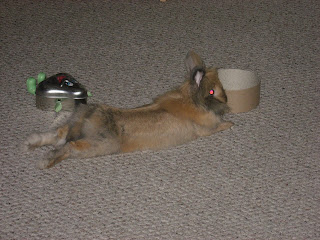 Here she is just hanging out and watching TV while she plays with her toys. 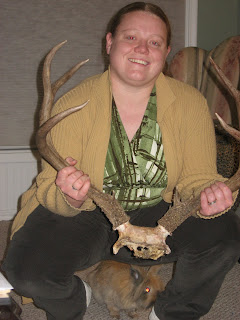 She is so helpfull. 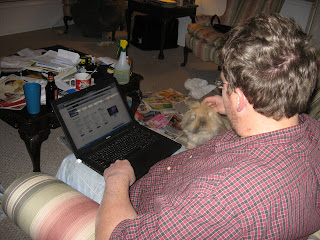 Tonight she is helping Wade get some bakery work done. He needs the supervision. 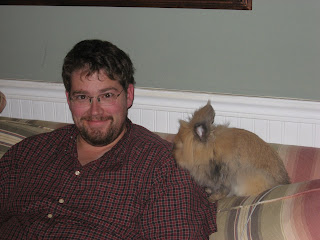 Anyway that is the update. Not much but something. I make no promises about future posts. But we are loving married life and staying busy.
Posted by Sandy at 8:26 PM 4 comments: